Monstera deliciosa vs. borsigiana: Here is the Real Truth

There has been so much debate on the differences between Monstera deliciosa vs. borsigiana. Fortunately, there is a pretty simple answer, but unfortunately, there has been much confusion and many myths that have run rampant. I am not a botanist, however I have gathered information from very reputable sources to get down to the bottom of this.

Now let’s take a look! I’ll highlight the simple facts, keep it short and simple and leave out any speculation so that you can have a definitive answer and some clarity in this conundrum.

WHICH IS THE TRUE SPECIES?

Let’s leave plant taxonomy to the experts. The simple fact is that borsigiana is NOT a separate species but rather a synonym of deliciosa.

How do I know? None other than the venerated Royal Botanic Gardens, Kew, has told us so. Monstera deliciosa is the only accepted species. Monstera borsigiana is simply a synonym and is not a distinct species.

Some will argue that borsigiana has smaller leaves and a quicker growth rate. The problem is that indoors, regardless what plant you have, leaves will never reach the mature size that they would in the wild, leading many people to believe that they have borsigiana.

In addition, leaf size and growth rate are highly dependent on conditions, age and many other factors, whether the plant is growing indoors or outdoors.

In the end, I will just go with the fact that the Royal Botanic Gadens, Kew, only lists one accepted species, and it is Monstera deliciosa. Don’t get hung up on the taxonomy or any of the overly analytical explanations. Leave the taxonomy to the experts.

MYTH: ONLY DELICIOSA HAS THE “RUFFLES” BEHIND THE LEAVES

There has been a myth running rampant that only deliciosa has the ruffles at the end of the petiole, close to where the leaf is.

The ruffles that you see right below where the leaf starts is called the geniculum, and it functions as a “joint” if you will, that allows the leaves to rotate in search of more light.

According to Enid Offolter of NSE Tropicals both deliciosa and borsigiana [for those individuals that still recognize borsigiana as being different] have the geniculum.

One very important thing to note is that very juvenile plants will not have the geniculum. So if your plant does not have one yet, it simply means that it is not old enough.

You can even have different leaves on the same plant where some have the geniculum and others don’t.

Here is one of the more juvenile leaves on my plant with no visible geniculum.

And that’s all folks! I promised this would be short. Plant taxonomy is very confusing even for the experts, and all we can do is trust reputable sources. I hope this post has brought some clarity to the Monstera deliciosa vs. borsigiana debate.

In the end, there is only one species, and it is Monstera deliciosa. Depending on growing conditions, there can be a very high degree of variability in appearance, and no two plants, or even leaves for that matter, will look alike.

Are you obsessed with Monstera species in general? Be sure not to miss my post: 15 Amazing Monstera Varieties to Add to Your Collection. There are so many unusual species in the genus Monstera, so why stop at just one? 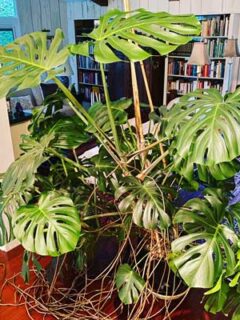 Previous
15 Amazing Monstera Varieties to Add to Your Collection