Sansevieria Flowers: 1 Secret to Get Snake Plants to Bloom

Did you know that Sansevieria can flower? Now reclassified into the Dracaena genus, Snake Plants or Mother-in-Law’s tongue, do in fact flower! Although it is much less common indoors, I’ve been fortunate enough to experience it and document it with photos. I’ll take you through my experience, and also discuss why Sansevieria flowers occur and when these plants bloom.

I have several snake plants but the only one that has flowered for me has been my Dracaena trifasciata (previously known as Sansevieria trifasciata).

HOW TO GET SANSEVIERIA FLOWERS

I can’t guarantee that yours will flower too, but I will discuss my experiences and with a little luck, maybe yours can too!

In general, the only thing that can make a plant bloom is having enough light. These plants are often abused and placed in dark corners which is probably why most of them don’t bloom. This is #1!

Secondly, once you can provide enough light (which includes direct sun indoors), a little bit of neglect can go a long way.

Many plants will bloom when they are mildly stressed, including allowing your potting mix to dry out completely in between watering, and keeping your plant somewhat pot-bound.

Now let me get into some timing issues and show you some photos of my own plant.

This is when I first noticed a flower stalk starting to form.

About 11 days later, this is how the plant looked. It ended up growing two flower stalks and they grew fairly rapidly.

About a week later, they continued to grow. You can see that the plant is getting some direct sun in this large, eastern exposure window. The photo below was taken at the very end of June (early summer for where I live).

About a month from when I first noticed a small flower spike forming, the first flowers opened at the base of the flower stalk.

After the first flowers started to open, they continued to open over the next two weeks or so.

Here are some other observations I made:

It’s funny how sometimes people will react by saying “oh your plant must be stressed” as if wishing ill-will on my plant. Ha! Just because a plant is stressed doesn’t mean it’s about to die (though in some cases this can be true!)

Stress-induced flowering can be caused by a number of reasons. The reason that the plant can produce flowers when stressed is so that it can proceed to produce seeds and continue to reproduce. It’s basically a last ditch effort for the species to continue surviving.

My plant was (and is) very healthy, but there were a couple stress factors. Namely, being pot bound and kept pretty dry (even though these weren’t life-threatening).

To summarize, I attribute blooming to 3 factors:

That’s all folks! Have you ever had your snake plant other mother-in-law’s tongue plant bloom for you? Have you observed anything different from me? Did you enjoy the fragrance?

Obsessed with snake plants? Be sure not to miss my other blog posts on these remarkable plants:

How to Propagate Snake Plant in Water

How to Propagate Snake Plant in Soil With Cuttings 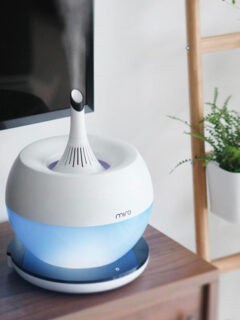 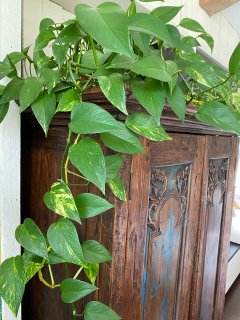 Next
Pothos Varieties: 15 Beautiful Types to Get Your Hands On
Click here to cancel reply.

I am so sad, no, I’m pissed. Mine (a 15+ year old plant) is suddenly sending out bloom shoots, but I’m leaving next week for 5 weeks… I’ll miss the whole experience. Can’t believe my “luck”.

Oh no :-(. Will someone be there to at least take a picture of it for you?

I had been watching for a cylindrical snake plant & found a little 4” potted one at the local Canadian Tire store in Leduc, Alberta. Brought it home to my shop & repotted it into a 6” pot and placed on my North facing counter which gets a bit of morning sun each day. This is next to my desk so I talked to it daily, lol.

Next thing I knew it grew 1 long towering spike from the center very quickly, which flowered and had a sticky serum bubbling out. The flowers were identical to yours above and fell around the little pot, making a sticky mess. I thought the little plant was happy to be saved, lol, and the flowers lasted about two weeks and then was left with the tall skinny spike. I had to move it away from the window to make room for some Spider plants that I had rooted in water and was transferring to soil so placed it about 12 ft from the window, with a bunch of assorted plants under fluorescent lights. Watered once a week and didn’t pay much attention as it seemed to be doing fine.

One day a couple of months later I was rearranging plants again and when I moved it down to eye sight level was delighted to find it had 2 new “pups” growing up on either side !! So I moved it to where it now has diffused light and the pups are growing well. Can’t wait till I can re-transplant and hopefully grow more of them. This is my very 1st cylindrical snake plant, I’m thankful that I found your blog and have been reading they all your posts or snake plants, thank you.

Hi Shauna! I'm glad you're enjoying my blog, and congrats on your flowers! It certainly is always a welcome surprise :-)

I startey snake plant from a leaf cutting. I let it grow for a summer in the garden until winter. I brought it in before winter and stuck it back outside in the hot weather, watering it every so often. After about two years it had one flower stalk. The next year I repoted it. And the next ( this year) it bloomed (7 stalks). I'll report it again next year. It seams to double in size every year.

Mine is currently blooming. I do like the fragrance. It too is fairly pot bound (when I purchased it perhaps a year ago it was very pot bound.) I transplanted it into a larger but still snug pot. It is in a northern window in a medium bright location. It dries out fairly often. I was really exiting see it bloom, I have never had one bloom before.

It's definitely an event to witness :-)