Banana Plant Care:  Do Bananas Grow in the U.S.?

Growing banana plants outdoors does not have to be limited to frost-free areas of the world.  Bananas plants grow very quickly and instantly provide a tropical flair to my Ohio garden.

They can provide a tropical flair your YOUR garden too, regardless of where you live!  Banana plant care is actually very easy overall.

I’ve experimented with two varieties in my garden and both are very easy to grow.  One of them is the cold hardy banana tree that will survive (with some protection).  The other can easily be overwintered.

In fact, they are probably the easiest plants that I have ever overwintered.

In this post, I will teach all about banana plant care and how to overwinter them.

Wait!!!  Don’t let the fancy Latin name scare you.  The common name is the Red Abyssinian Banana, but in the nurseries, they’ll most likely have the Latin name which is Ensete vetricosum maurelii.

This is the tender banana plant that I was telling you about in the introduction.  This member of the banana family has gorgeous green and maroon leaves.

I first started growing these a few years ago after purchasing a couple small plants at a local nursery, and they are the stars of my outdoor garden.

In the example below, I took one of my Ensete vetricosum maurelii out of the garage in mid-April when the day time temperatures were mild.

During this period of time, I would return the plant into the garage in the evening if the temperatures dipped below about 50F or so.

Here’s what it looked like after being in the heated garage all winter.

Pretty pathetic right?  The previous Fall, when I brought the plant in the garage for the winter, I simply sawed the trunk off and left maybe a foot or so of the trunk.

When I tell people I literally take a saw to the plant, they get so scared!  Please trust me when I say it works, because I’ve been doing this for many years!  Just take a saw to it!  I promise you, it works!

All this growth during the winter was very tender and those leaves continued to grow but were pretty ugly.  So I took a saw to it again.

Just a quick note that these are tender plants.  We’ll get to the cold hardy banana soon.  Our garage is heated so it stays cool, but always above freezing.

Our garage normally stays over 50F.  If you don’t have a heated garaged, a cool, dark basement works as well.

Very soon after sawing the trunk, the plant will start to grow again from the middle of the trunk.  In fact, a few hours after I sawed it off, I noticed the middle part was starting to grow already!

They really have an amazing growth rate!

I also scraped as much soil that I could from the surface and replaced with fresh potting soil.  After it warmed up a bit and the plant went into its permanent spot, I always add some Osmocote fertilizer and situate the plant in an area with plenty of sun.

It is a time release fertilizer so your banana plant will get lightly fertilized each time you water.

Banana plants are heavy feeders though so you can even do two applications of Osmocote throughout the growing season.

One of the gratifying aspects of this plant is that fact that it grows like a weed.  Take a look at the picture below that was taken on June 15th, just 2 months after I first sawed the trunk off.

And two months later, by mid-August, look how big it is!  At this point, it was taller than me.

And by September, it continued to go crazy.  You can see it pictured in the right side of the following photograph.  I had moved the pot from the patio into my main garden.

These plants like plenty of sun, plenty of water, and plenty of fertilizer since they grow quickly.  I normally mix in some Osmocote into the soil, and I also fertilize with Miracle-Gro once a week.

Don’t be afraid to “overwater” because it will be pretty difficult to.

Make sure that you don’t let your Red Abyssinian Banana plant dry out completely.  They definitely do not like that.  Keep them well watered and well fertilized and they will provide a spectacular show for you.

Once the growing season is over and frost threatens, I literally take a saw to the plant again, leaving about 1 foot of the trunk, and then I store the pot in our heated garage where it stays dark and cool all winter.

I don’t give the plant a drop of water during the winter.  Zero water!  You may find that hard to believe but it truly works so try it out for yourself.

The key is to make sure that you store it in a cool location that is at least 45-50F or so all winter and probably no higher than 60F.

Once I had this plant planted in the ground, and I simply dug it up and plopped it in a black garbage bag (just the root ball) and threw it in the garage!  It survived just as well as my other one.

Please note that all banana plants will die after they flower, but they will grow banana pups from the base.  My growing season is not long enough for flowering, so I can keep overwintering the same plant year after year.

Again, if you don’t have a heated garage, a cool and dark basement will also be perfect.  I encourage you to try growing these.  You won’t regret it!

Now let’s move on to the cold hard banana tree.

Yes, you’ve read that correctly!  This is a hardy banana plant that is supposed to be hardy in all 50 U.S. states!   One year, I planted two Musa basjoo plants in my garden.

Both were planted in mid-April.  Here is one of them:

They were both about 1 foot tall or less when I received them in April and I planted them immediately into the garden.

By August, look how big and beautiful they are!

Even into November, they continued to grow and were still beautiful, while the rest of the garden had fizzled out by then.  In fact they stayed green and beautiful until the frost came and the plants eventually collapsed.

Musa basjoo growth rates are amazing.  It was hard to believe that the tiny plants that I received in April grew several feet tall by the end of the summer.

There are different methods that people use to overwinter Musa basjoo in the ground.  Some people cut the trunks off and others leave them as is.

I chose to leave them as-is and I mulched the base of both of the plants with plenty of leaves in the Fall.

The winter was fairly mild and both plants actually survived the winter and grew even bigger the second season.

One thing that Musa basjoo plants do NOT like is to be in poorly drained, wet soil over the winter.  When you plant these, choose a sunny area with well drained soil.

Avoid planting these in any area that has poor drainage or swampy soil, because wet soil and cold winters will spell death for these plants!

Give these plants plenty of sun, plenty of water, and plenty of fertilizer.  It would be hard to overwater banana plants as long as the soil is well drained.

I like to fertilize my cold hardy banana trees with fish emulsion fertilizer.

I like to also supplement with Miracle-Gro every once in a while as well, though much less frequently.

Don’t be afraid to try new plants in the garden.  Growing the red abyssinian banana and Musa basjoo is easy.  I got tired of growing the same old plants every year, so I slowly started experimenting with different tropical plants to create my own tropical oasis.

There is nothing that makes me happier than walking through my own tropical jungle in my backyard on a hot summer day.

Banana plant care is truly easy, and both the Red Abyssinian Banana and Musa basjoo will provide a beautiful tropical touch to your garden, regardless of where you live!

Please do me a favor and share this post to social media because it will help me spread the Ohio Tropics plant care tips to the masses! Also, check out my shop on Amazon for all your plant care needs: 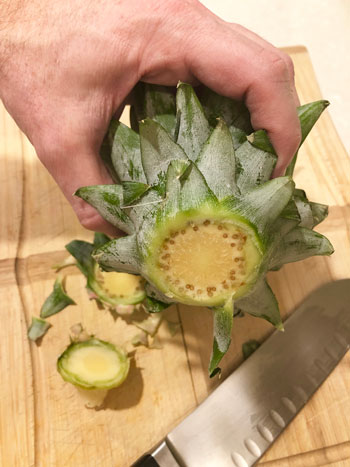 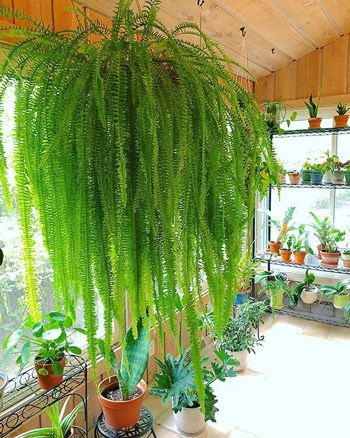 Next
Secrets on How Not to Kill Your Indoor Ferns
Click here to cancel reply.

Hi. Thanks for your article. Have just found you. I live in UK, about 30 miles from the south coast. I have one of each of the banana plants in your article, in pots in my small garden. Soon l will have to get them into garage for Winter. Would never have thought of cutting off the main stem. I will have a go, and plant in my garden next spring. Many thanks.

You're very welcome Diana! I assume you're talking about the red leaved one. Make sure your garage doesn't get down to freezing. Try and place it in a protected place there.

I live in central Indiana and I have a Musa Basjoo that is four years old (about 20 ft. High with about 25 trunks. It is spreading into parts of my garden where I have raised beds that I don’t want to lose. If I only mulch the middle part of the grove with the plant survive if the outer parts freeze?

Wow that sounds spectacular! The mulched parts will still survive, correct. Curious how you mulch your own plant?

We have two of the Musa Basjoo that we had to plant in a temporary spot until fence was built. Now that fence is done, I’m wondering if it’s best to transplant into their final resting place in fall or spring? We have a third one that sprouted and is tiny, so that one we figured we’d just bring in for the winter. But the two bigger ones we can’t!

Hi Holly! If you can move them easily now, I would try that. But if they're too big to dig out right now, I would wait until springtime when growth starts.

Can you eat Bannas off a banana tree growing in Portsmouth Ohio ?

Which type of banana do you have?

Thank you, those were the suggestions I was hoping for. As for our Puget Sound area weather in winter, systems from the Pacific are wet, often drenching, and in the 30s and 40s, highs in the 50s (all F of course). Systems from the north and east are typically clear and cold, often accompanied by strong winds. It rarely gets to single digits nasty cold, and most winters we’ll see snow (has been up to 18” but usually less where I live) and maybe some freezing rain that damages a lot of foliage. My single basjoo can be shrouded and protected, but the weather worries me a bit for it. Overall a delightful place to be! Again, thank you for wisdom, Will